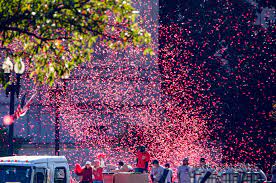 The Washington Nationals entered Tuesday with the 6th highest payroll in the MLB ($163,933,823), which has led them to the 7th worst record in the league. The Nationals are the biggest disappointment of the 2019 season as they were expected to compete with the Phillies for the NL East title, but they have severely underperformed.

Last week, the Nationals were swept by the New York Mets in a four-game series, which sent Washington into a downward spiral. They did rebound by winning three out of four against the Marlins, but they did lose the last game of the series which was started by Max Scherzer.

The top three members of the rotation have held their own with Scherzer (3.26 ERA), Stephen Strasburg (3.25 ERA), and Patrick Corbin (2.85 ERA) all doing their job, but the bullpen has not been able to hold a lead, and that will be the reason why the Nationals will not compete this year.

That bullpen has far too many leaks in it to fix, and the attempts to strengthen the bullpen have not gone well. The Nats acquired Kyle Barraclough in the offseason and he is off to a poor start with a 4.87 ERA and 1.72 WHIP. He had the potential to be the bridge to Sean Doolittle, but Barraclough has not lived up to expectations.

Speaking of Sean Doolittle, he is having his worst season in his 8-year career with a 3.68 ERA as well as an H/9 of 9.82. While these two are not performing well, they are still the two best relievers on the Nationals, which is not a good sign. Signing Craig Kimbrel will not fix all of the issues in this bullpen. They will need three Craig Kimbrel’s if they want to compete this year.

It seems inevitable at this point that Davey Martinez will be fired. He might not deserve it, but this Nationals’ ownership expects results and they will not settle for anything less than perfection. They go through managers just as frequently as George Steinbrenner did highlighted by the firing of Dusty Baker. Behind Dusty Baker, the Nationals claimed two NL East titles, but they were eliminated in the first round both years, which led to his firing.

The Nationals have had 8 different managers in their 15-year existence, and it seems they will be in search of their 9th manager shortly. An 82-80 record followed by an under .500 start for Davey Martinez could spell the end for him.

The real question for these Nationals teams is whether or not they will be sellers at the trade deadline. There is speculation that Scherzer and Anthony Rendon could wind up on another team come July, but that may not be the case. The Nationals realize that they have a good team and a young core of players like Trea Turner, Juan Soto, and Victor Robles. They are too talented of a team and have too many big contracts to attempt a rebuild.

It is likely that the Nats will look to extend Anthony Rendon rather than trade away his expiring deal. He is a homegrown guy that the Nationals would love to keep around. One problem with trading away Rendon is he will not net much of a return. Rental bats have not had a huge market in the last few years.

Manny Machado had the biggest return of a position player on an expiring deal, and that deal was more quantity than quality. Rendon is not of the caliber of Machado, so it would be unlikely for the Nationals to receive a top 100 prospect for him.

The main issue for the Nationals right now is Patrick Corbin. They just signed him to a 6 year/$140 million deal, so rebuilding is not an option. You can’t try to rebuild immediately after signing a guy to that large of a deal.

Max Scherzer still has two more years on his deal, so trading him away would be insane since they have big deals like Corbin and Strasburg still on their books. They will not compete for the next few years if they trade Scherzer away.

There are some players who could be dealt away at the deadline, though. One possible candidate is Brian Dozer and his expiring contract. Dozer is not having a great year with a .211 batting average as well as a .665 OPS, so the return would not be much. This would open up a spot in the infield for Nationals’ top prospect Carter Kieboom to get some major league reps.

Another potential but surprising trade piece could be Adam Eaton. He’s had two good years in Washington, but he never panned out to what the Nationals expected of him. He has two more club-friendly years left on his deal that could entice other teams looking for a steady outfielder.

In 2016, the Nationals gave up the #3 and #38 ranked prospects in baseball to acquire Eaton. They will not get the same package for dealing Eaton away now, but they could receive some pieces, specifically bullpen help, that will come in handy in the next few years.

The Nationals can compete next year, but they need to build up a bullpen as that is the primary weakness that is keeping them from competing this year. That should be their main focus in the off-season, but they can get a jump start on 2020 by trading away pieces this season. They can either trade for younger bullpen guys this season or for pieces that will help them acquire established relievers in the off-season.