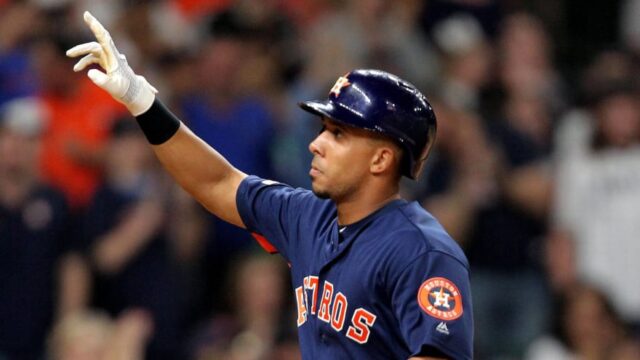 The 2018-2019 free agency market moved slowly this past offseason, as shown by Dallas Keuchel and Craig Kimbrel still being unsigned two months into the season, but there was still money thrown around. The two biggest deals of free agency came with Manny Machado and Bryce Harper, who both signed contracts of $300m+. Those deals are hard to analyze as they last 10+ years, so they are in it for the long haul. There were several players that were signed to 2-3 years, and those deals can be analyzed right now. Some of these 2-3 year deals may pay off for teams, but others look horrendous.

A-League of their Own

This signing will go down as the best acquisition of this year’s free agency class (excluding Machado and Harper). Brantley has been pretty consistent over his career and is off to a hot start in 2019. He is hitting .328 with 10 HR and 32 RBIs, while playing in 47 out of 48 total games. This could be a career year for Brantley as he is on pace to shatter his career highs. Brantley’s biggest attribute is his ability to put the ball in play as he has yet to strike out more than 80 times in a season. Michael Brantley will contribute heavily to another Astros World Series run.

Adam Ottavino entered free agency as the most desirable bullpen arm on the market. In 2018 with the Colorado Rockies, he posted a 2.43 ERA with a 0.99 WHIP as well as 112 strikeouts in 77.2 innings. It is very unusual for a pitcher to post these numbers while playing a majority of his games at Coors field, but Ottavino did just that posting a 2.10 ERA at Coors, while only allowing 14 hits in 34.1 innings.

Ottavino is off to a great start in 2019 with a 1.61 ERA as well as 30 strikeouts in 22.1 innings. The one thing to watch out for is the number of walks that he has given up. Ottavino has walked 17 batters so far this season, which is the main reason for his fairly high 1.25 WHIP. His opponent’s batting average is stunningly low at .151, so he is not giving up hits, but he is giving free passes at an alarming rate.

The Yankees signed another former Rockie in free agency, and he has played just as well as Ottavino. DJ LeMahieu has been a steady bat in the Yankees lineup with all of the injuries they have suffered early in the season. LeMahieu’s strength has always been that he is a good contact hitter, and he has done just that with a .315 batting average in New York. He has an impressive .350 BABIP and has given the Yankees second and third base depth. This signing could be crucial for the Yankees, especially after the news that Miguel Andujar will miss the remainder of the 2019 season with a torn right labrum.

Staying in the AL East, the Tampa Bay Rays decided to bolster their starting rotation with the acquisition of Charlie Morton. The Rays relied heavily on their bullpen in 2018 and it rode them to 90 wins. Charlie Morton joined the Rays rotation that consists of reigning AL Cy Young winner Blake Snell and emerging starting pitcher Tyler Glasnow. Morton has taken the load off of the Rays bullpen with a 2.65 ERA as well as 67 strikeouts in 54.1 innings. The Rays are just 1 game out of first place behind the Yankees and solidifying the rotation with the addition of Charlie Morton has played a big part in it.

Andrew Miller is just three years removed from his magical performance in 2016 with the Cleveland Indians where they came just a game short of bringing a championship to Cleveland. It is surprising that the Cardinals gave Andrew Miller $25 million after he had a subpar 2018 season with a 4.24 ERA and a 1.38 WHIP. Miller ended the 2018 season with a horrendous ALDS performance where he made 2 appearances, recorded 1 out, walked 3 batters, and had a WHIP of 12.

Miller has not performed well in St. Louis posting a 4.86 ERA and a 1.50 WHIP. He is still striking out batters at a pretty good rate, but Miller has an alarming 8.64 H/9 as well as a 4.86 BB/9 and 2.70 HR/9. Andrew Miller has not been the high leverage guy the Cardinals envisioned him to be when they signed him as he is letting men on base and giving up runs.

The New York Mets brought Jeurys Familia back to the Big Apple after trading him to Oakland last July. Familia had been a Met his entire career before briefly becoming an Athletic in 2018. The Mets may be regretting their decision to bring back Familia especially to a 3-year/$30 million deal after his poor start in 2019. Familia was brought back as the bridge to newly acquired closer Edwin Diaz, but Familia has not been a sure thing for the Mets. He has a 5.60 ERA as well as a 6.62 BB/9. Familia is giving up too many free passes and he is 0-2 in save chances. In 2016, Familia had 51 saves, but he is far removed from that season. It is getting very hard for the Mets to trust Familia with a lead and he is still under contract for two more years after this season.

The Mets make another appearance on this list and this time it is on the ugly side. The problem with Jed Lowrie is that he has not played a single game for the Mets. He was injured on the first day of spring training and has continued to have setback after setback. There is a good chance that Lowrie may never play a game for the Mets, which is not good considering the Mets gave him $20 million.

Jed Lowrie was off to a hot start in 2018 with the Athletics, but he cooled down in the second half where he hit .239 with a .727 OPS. The Mets obviously did not care about Lowrie’s second-half stats as they signed him to a pretty sizable deal. It is unclear where this signing went wrong. Lowrie injured himself immediately upon joining the Mets, so either he had a freak injury, or the Mets missed a pretty glaring issue in his medical report. The Mets invested their money pretty poorly in the offseason and their 21-25 record is a reflection of that.

Barring a collapse from Machado or Harper in the back half of their contract, the Dodgers signing Joe Kelly may go down as the worst signing of the 2018-2019 offseason. Kelly was phenomenal for the Boston Red Sox in their World Series run. In the 2018 postseason, Kelly pitched 11.1 innings with an 0.81 ERA, while striking 13 batters. The Dodgers saw firsthand what Kelly could do in the World Series as he pitched 6 innings against them and gave up 0 runs, while also striking out 10 and only allowing 4 hits.

It seems the Dodgers ignored Kelly’s 2018 regular season stats as now they are stuck with him for three years. Kelly was great in the postseason, but he had a 4.39 ERA in the regular season with an H/9 of 12.46. Joe Kelly is struggling in 2019 with a 7.79 ERA as well a 1.73 WHIP. When you pay a guy $25 million, you expect him to be a high leverage guy, but Kelly is only being used in games that have already been decided. There were points in the season where Kelly would lower his ERA by going an inning where he gave up a run. If Joe Kelly continues to pitch at this rate, he may not be a Dodger for long.